The aim of this study was to evaluate the usefulness of health screening for early detection and improved prognosis in pancreatic cancer.

Health screening is somewhat helpful for improving the curative resection rate and median survival of patients with pancreatic cancer detected by screening tests. However, the benefit of this method in improving long-term survival is limited by how early the cancer is detected.

The aim of this study was to evaluate the usefulness of health screening for early detection and improved prognosis in pancreatic cancer.

Health screening is somewhat helpful for improving the curative resection rate and median survival of patients with pancreatic cancer detected by screening tests. However, the benefit of this method in improving long-term survival is limited by how early the cancer is detected.

The prognosis of pancreatic cancer is very poor. For all stages combined, the 5-year survival rate is 5% and even for those people diagnosed with resectable disease, the 5-year survival rate is only 20%. Approximately only 20% of patients have disease amendable to surgical resection at the time of presentation.2 In addition, a subset of patients undergoing curative resection (up to 30%) will have positive resection margins, reflecting an incomplete resection. Eventually less than 10% of patients with pancreatic cancer undergo a margin-negative (R0) resection.3 The dismal prognosis of this disease is due to the silent nature of pancreatic cancer until late in the disease process.4 Patients present for a medical evaluation only when the cancer is advanced; this is when they experience the signs and symptoms of obstructive jaundice, abdominal pain, and weight loss.

The following data from a self administered questionnaire and/or physical examination by physicians were collected: age, gender, history of smoking and alcohol, a medical history such as diabetes and chronic pancreatitis, family medical history, body mass index (BMI), and whether a specific symptom was present or absent. BMI was calculated by dividing the weight (kg) by height (m2) on the basis of the usual weight before losing weight. In addition, the medical records on pancreatic cancer such as modality of diagnosis, imaging finding, tumor stage, resection status, and survival rate were reviewed. The CA 19-9 level, as a tumor marker was collected. The upper limit of the normal range of CA 19-9 was defined as 37 U/mL, as suggested by Del Villano et al.7 The modality of diagnosis was an initial test used for a suspected diagnosis of pancreatic cancer. If surgery was impossible, the tumor stage was determined based on the imaging finding. If surgery was performed, the tumor stage was determined by the clinical staging system of the American Joint Committee on Cancer (AJCC) TNM classification. A curative resection was defined as a margin-negative (R0) resection by microscopy.

Statistical analysis was performed using the χ2 test for comparison of discrete variables and the t-test was used for comparison of continuous variables. The BMI measured in this study was expressed as the median. Statistical analysis was performed using PASW Statistics 17.0 (SPSS Inc., Chicago, IL, USA). All p-values were two-tailed and a value of p<0.05 was considered significant.

Pancreatic cancer remains a lethal malignancy. Due to the rapid progression of pancreatic cancers, early detection through screening will be required to improve long-term outcomes.8 In this respect, pancreatic neoplasias may meet some of the World Health Organization criteria for principles of screening. Sohn et al.9 showed that survival was markedly better in patients that had small tumors, negative resection margins, and no lymph node involvement. Ariyama et al. reported a postoperative 5-year cumulative survival rate of 100% for patients with tumors less than 1 cm in size.10,11 These data provide some evidence that early detection through screening may improve the long-term outcome for adenocarcinoma of the pancreas. However, since the prevalence of pancreatic cancer remains too low (8 to 12 per 100,000), it would not be cost effective and the yield of screening would be extremely low in the general population.4,12 At present, as it is known that 3% to 16% of pancreatic cancers are either syndromic or familial, patients with known genetic syndromes predispose them to the disease or with a strong familial history may be offered screening and surveillance in an attempt to detect pancreatic neoplasia at a curable stage.8 Whereas routine check-up for detecting of early pancreatic cancer in general population was not recommended to date. This study focused on a general health screening program. Abdominal USG which was usually included in the health screening program, screened several diseases related with hepatobiliary system, kidney and other organ of the abdominal cavity, not only for pancreatic cancers. Therefore, the cost-effectiveness for the detection of pancreatic cancer is not an important issue under this screening program. Moreover, there is a chance that the increasing volume of health screening improves the detection rate of early pancreatic cancer.

Also, in this study, half of the patients in the HPC group were initially suspected of having pancreatic cancer with abnormal USG findings. However, as mentioned earlier, the other half in the HPC group had normal USG findings. Between patients with normal and abnormal USG findings in the HPC group, there was no significant difference except for the BMI. Contrary to expectations, the BMI was higher in patients with abnormal USG findings than in patients with normal USG findings. But, the BMI was not always correlated with abdominal obesity and the sonographic view could be affected by bowel gas too. Of all the imaging studies, the endoscopic ultrasound (EUS) and helical CT scans are the most sensitive imaging modalities for detecting pancreatic tumor.4 Some studies reported that the EUS was useful for surveillance in high risk group patients.4,6 But, using the EUS directly to screen the general population may be problematic due to invasiveness of methods and limited availabiliaty.3,19 Multi-detector CT is the current preferred abdominal imaging test for pancreatic disease, including the diagnosis and staging of pancreatic cancer.13,20 But, because of the concern for repeated exposure to radiation, the role of the CT in screening for small pancreatic cancers remains to be established.3

The limitations of the present study include the following. First, the HPC group did not precisely represent the general population because they were interested in health enough to have private health screening and some of them had presenting symptoms at the time of their checkups. Second, since this hospital is a tertiary referral center, the patients that registered in the OPC group likely reflects a selection bias. Finally, the target number of pancreatic cancer patients diagnosed at the health promotion center was small. But considering the incidence of pancreatic cancer in the general population,21,22 the number of cases identified in the HPC group was not small.

Baseline Characteristics and Presenting Symptoms of the HPC and OPC Groups 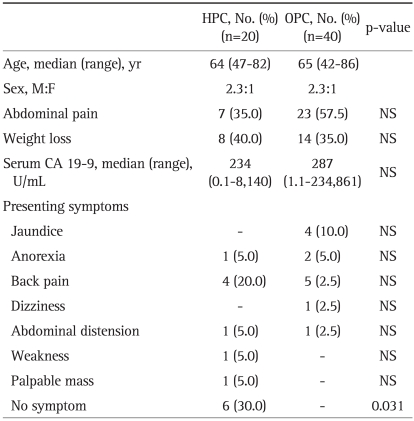 Comparison of Risk Factors between the HPC and OPC Groups

Characteristics of Patients with Abnormal Ultrasonographic Findings in the HPC Group 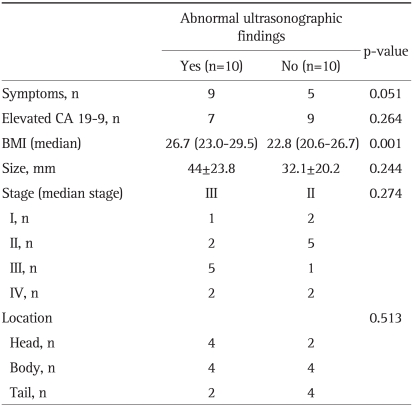 Comparison of Prognoses between the HPC and OPC Groups

Differences between Symptomatic and Asymptomatic Patients in the HPC Groups 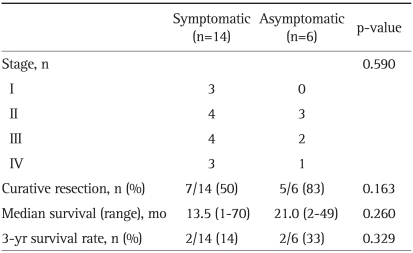 Baseline Characteristics and Presenting Symptoms of the HPC and OPC Groups

Comparison of Risk Factors between the HPC and OPC Groups

Characteristics of Patients with Abnormal Ultrasonographic Findings in the HPC Group

Comparison of Prognoses between the HPC and OPC Groups

Differences between Symptomatic and Asymptomatic Patients in the HPC Groups