We retrospectively reviewed the combined impedance-esophageal manometry data from consecutive patients who had abnormal acid exposure during 24-hour esophageal pH monitoring. We compared these data to the results from functional heartburn (FH) and asymptomatic volunteers.

Patients with GERD have mild peristaltic dysfunction and incomplete and slower esophageal bolus transit. These conditions predispose them to prolonged acid contact with the esophagus.

We retrospectively reviewed the combined impedance-esophageal manometry data from consecutive patients who had abnormal acid exposure during 24-hour esophageal pH monitoring. We compared these data to the results from functional heartburn (FH) and asymptomatic volunteers.

Patients with GERD have mild peristaltic dysfunction and incomplete and slower esophageal bolus transit. These conditions predispose them to prolonged acid contact with the esophagus.

Esophageal motility disturbance has been regarded as main pathophysiologic mechanism of gastroesophageal reflux disease (GERD),1 however, manometry findings were often normal in patients with GERD. Most common pattern of peristaltic failure is ineffective esophageal motility (IEM) which is commonly associated with delayed acid clearance.2 In a subgroup of patients with nonerosive reflux disease (NERD) or mild esophagitis, acid clearance is prolonged in spite of normal or minimally impaired esophageal peristalsis.3

Twenty asymptomatic volunteers were recruited through an advertisement for other study in 2006.10 None of the subjects had gastrointestinal symptoms or a history of gastrointestinal surgery except appendectomy, and none were taking any medication. It was confirmed that no subjects had any history of cardiovascular, respiratory, neuropsychiatric, or endocrine disorders. Alcohol, smoking, and medications known to influence the gastrointestinal motility were prohibited during combined MII-EM study.

The nine-channel combined MII-EM catheter (Sandhill EFT; Sandhill Scientific Inc., Highland Ranch, CO, USA) has two circumferential solid-state pressure sensors, at 5 and 10 cm from the tip, and two uni-directional pressure sensors, at 15 and 20 cm. The impedance measuring segments consist of pairs of metal rings placed 2 cm apart, centered at 10, 15, 20, and 25 cm from the tip. The catheter was inserted transnasally into the esophagus to a depth of 60 cm. The LES was identified by using a stationary pull-through technique, and the most distal part of the sensor was placed in the high-pressure zone of the LES. In the semi recumbent position, patients were administered 10 swallows of 5 mL of normal saline and 10 swallows of 5 mL of viscous (apple sauce-like consistency) material, with each swallow being taken 20 to 30 seconds apart. Normal saline was used instead of water because it has a standardized ionic concentration and provides for better impedance changes than water. Sandhill Scientific Inc. provided us with the viscous material manufactured as a food substance with a known standardized impedance value.

MII parameters analyzed included bolus entry at each specific level obtained at the 50% point between 3 seconds pre-swallow impedance baseline and impedance nadir during bolus presence and bolus exit determined as return to this 50% point on the impedance-recovery curve. Total bolus transit time (TBTT) was calculated as time elapsed between bolus entry at 20 cm above LES and bolus exit at 5 cm above LES. Swallows were classified by MII as showing: 1) complete bolus transit, if bolus entry occurred at the most proximal site (20 cm above LES) and bolus exit points were recorded in all three distal impedance-measuring sites (i.e., 15, 10, and 5 cm above the LES); and 2) incomplete bolus transit, if bolus exit was not identified at any one of the three distal impedance-measuring sites. Using impedance criteria, normal esophageal bolus clearance can be defined as complete clearance of at least 80% of liquid boluses and at least 70% of viscous.

Manometric data were described by mean±standard deviation. Descriptive statistics (median, 25th to 75th percentile) were used to describe the impedance findings because they were not normally distributed. One way ANOVA test was used to assess differences in manometric and impedance parameters among the asymptomatic volunteers, FH and GERD patients in the liquid and the viscous swallows. The TBTT of swallows with incomplete bolus transit was regarded as an infinite value, and they were analyzed together with the TBTT of swallows with complete transit. For statistical significance, the alpha was set at 0.05.

The manometric diagnoses of GERD group were normal in 25, IEM in five and nutcracker esophagus in three patients. The IEM was diagnosed in 10% of normal volunteers, 21% of FH and 15% of GERD patients (p>0.05). Mid-respiratory basal LES pressure was lowest in GERD patients and it was significantly lower in FH compared to volunteers. The distal esophageal contraction amplitude was not different among three groups (Table 2).

The manometric and impedance data were reanalyzed according to the esophageal erosion. The basal LES pressure, distal esophageal contraction amplitude, viscous bolus transit parameters were not different in both groups (Table 4). However, TBTT in ERD group was significantly longer than NERD group in the liquid swallows (Table 5).

Bolus transit parameters of individual swallow were not correlated with any parameters of 24-hour pH monitoring, such as % time pH <4, DeMeester score, longest time of reflux except acid clearance time. Acid clearance time was longer in GERD patients who had abnormal bolus transit than GERD patients with normal bolus transit in liquid swallows (1.4±1.3 seconds vs 1.2±0.6 seconds, p<0.05) and viscous swallows (1.3±1.2 seconds vs 1.1±0.4 seconds, p<0.05) (Fig. 1).

In this study, we found that patients with GERD frequently had incomplete or slow bolus transit compared to asymptomatic volunteers and FH patients. Our findings suggested that abnormal esophageal transit was a common pathophysiologic abnormality of GERD and might cause delayed esophageal volume clearance and esophageal erosions. GERD patient who had abnormal bolus transit had longer acid clearance time. These findings also suggested bolus transit abnormality would influence the prolonged acid contact. Abnormal transit underlies prolonged acid clearance by affecting esophageal emptying and saliva transport.

The abnormal bolus transit was frequently observed in GERD patients 36% and 55% of in liquid and viscous swallows, respectively. As expected, patients with esophageal erosion had prolonged bolus transport. It is conceivable that the inflamed esophageal mucosa as one of the results of impaired bolus transit. The prevalence of abnormal transit in NERD patients was higher than previous studies in which demonstrated minimal transit abnormalities in NERD patients.4 This discrepancy might be related to the fact that we enrolled only patients who were confirmed as

This study showed mild peristaltic dysfunction and lower LES pressure in GERD patients. Peristaltic dysfunction may be involved in impaired esophageal propulsion mechanisms and prolonged esophageal clearance.10 Mean basal LES was lowest in the GERD groups and it was lower in FH compared to volunteers, although these results were still within the normal range. Ineffective peristaltic contraction was not different in liquid swallows, but more frequent in viscous swallows in GERD group compared with other groups. Viscous swallows are more sensitive than liquid swallows to detect motor or bolus transit abnormality. In the present study, the prevalence of IEM was similar among patients with GERD, FH, and asymptomatic volunteers, the reason of that is because most of enrolled patients were NERD and other patients were mild reflux esophagitis.

The esophageal motility and bolus transit patterns of FH were interesting. The esophageal bolus transit pattern of FH patients was similar as healthy volunteers, rather than GERD. However, the motility abnormality is distinct from volunteers. Mean LES pressure was lower and ineffective contraction in viscous swallows was more frequent in FH than volunteers. Their esophageal motility abnormality seems to be between asymptomatic volunteers and GERD. These results also support the exclusion of FH from real GERD with abnormal pH acid exposure.

There are some limitations in this study. First, the asymptomatic volunteers were not age, sex-matched control and were not recruited during the same study period. Strictly saying, abnormal bolus transit was also observed in the control group, although infrequently. It suggests the asymptomatic control groups might not represent true normal subject. Second, the number of patients with ERD was too small to characterize the bolus transit in these patients. However, the present study has some strength. The GERD group was homogenous. All of the patients had abnormal esophageal exposure irrespective of symptom association. 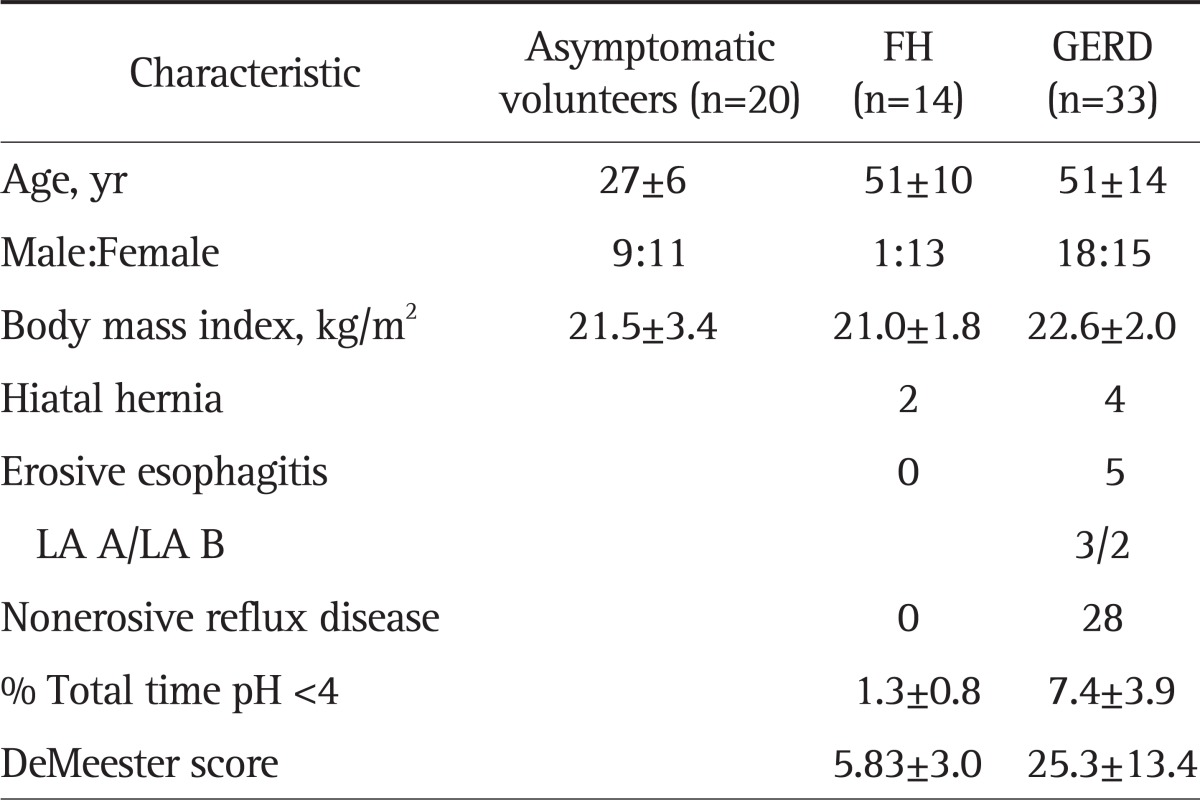 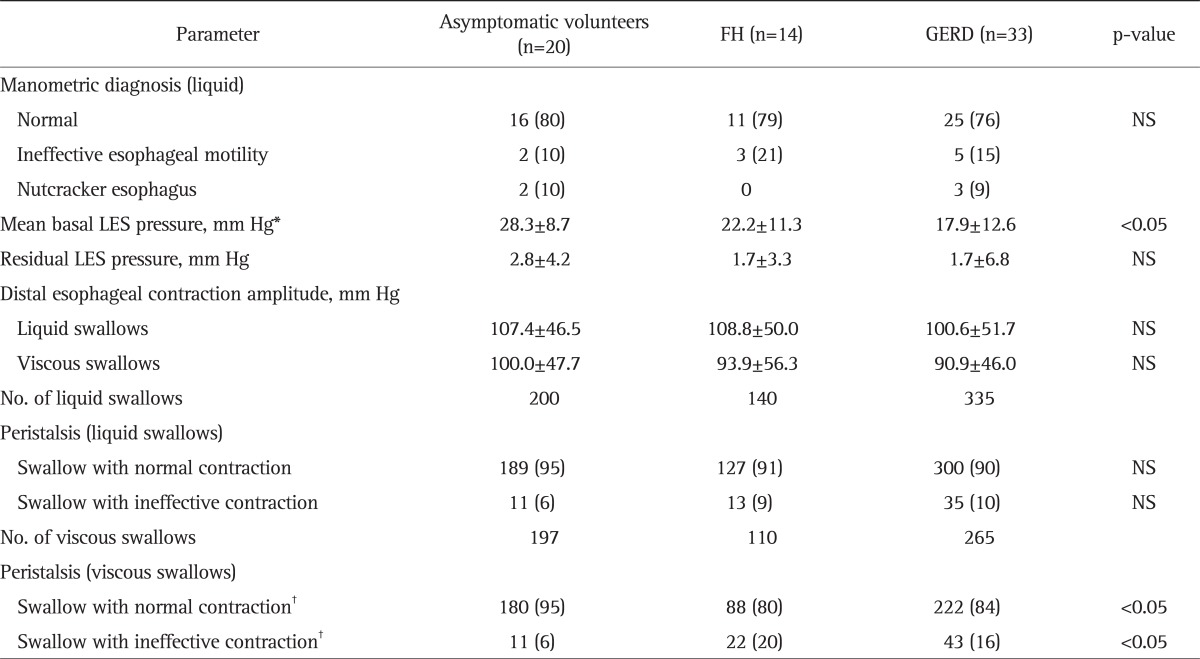 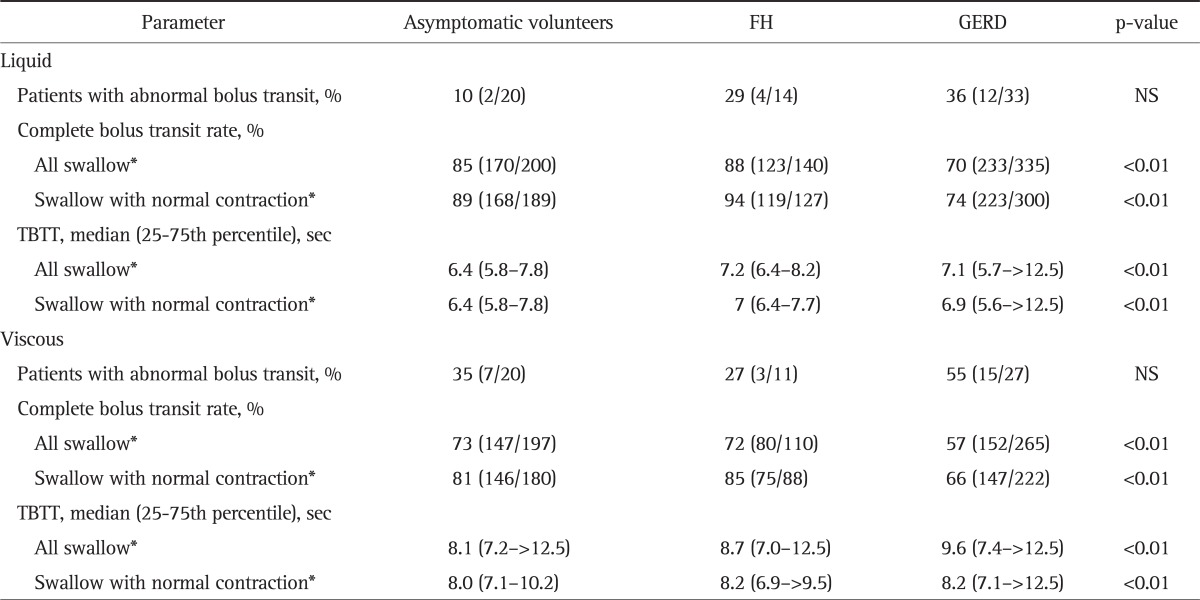 Manometric Parameters for the ERD Group and NERD Groups 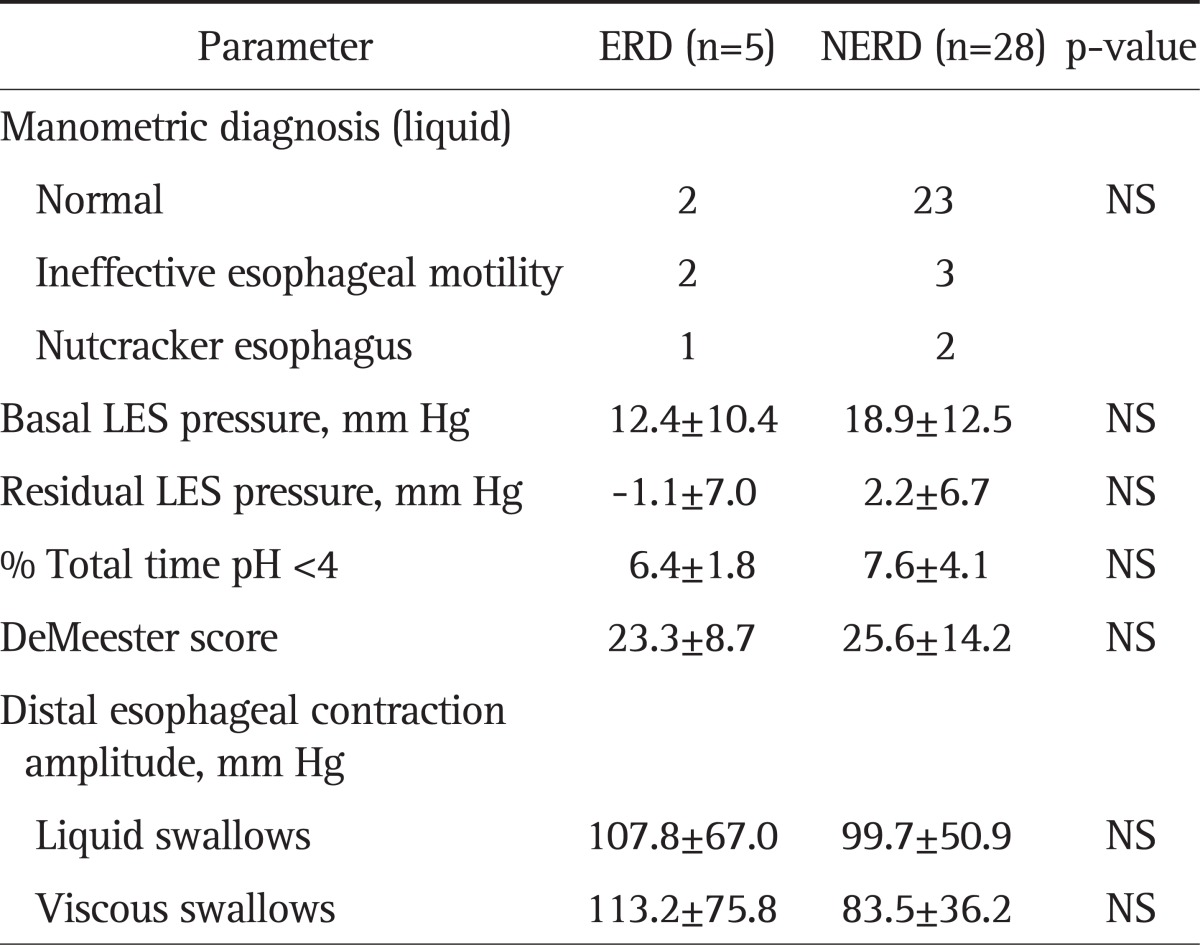 Impedance Parameters for the ERD Group and NERD Groups 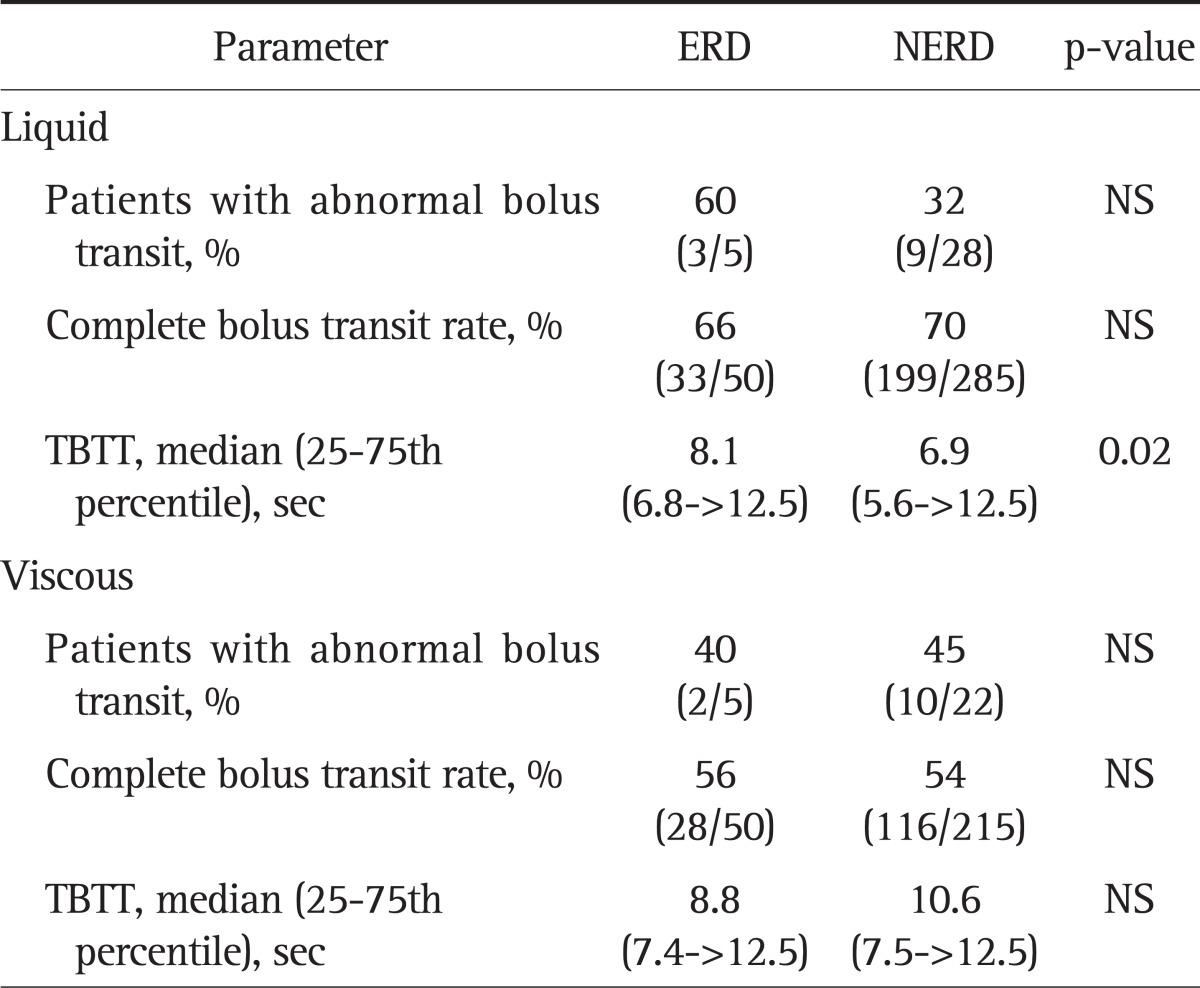 Manometric Parameters for the ERD Group and NERD Groups

Impedance Parameters for the ERD Group and NERD Groups