We aimed to assess the effectiveness of self-expanding metal stent (SEMS) insertion by evaluating the learning curve in relation to the experience of an endoscopist.

We retrospectively analyzed the outcomes of 120 SEMS insertion procedures performed by one endoscopist in patients with malignant colorectal obstruction. We compared the technical and clinical success rates, complication rates, and duration of the procedures by quartiles.

An experienced endoscopist was able to perform the SEMS insertion procedure easily and effectively after performing 30 SEMS insertions.

We aimed to assess the effectiveness of self-expanding metal stent (SEMS) insertion by evaluating the learning curve in relation to the experience of an endoscopist.

We retrospectively analyzed the outcomes of 120 SEMS insertion procedures performed by one endoscopist in patients with malignant colorectal obstruction. We compared the technical and clinical success rates, complication rates, and duration of the procedures by quartiles.

An experienced endoscopist was able to perform the SEMS insertion procedure easily and effectively after performing 30 SEMS insertions.

Colorectal cancer is the third most common cancer in Korea and its incidence is rapidly increasing due to more westernized dietary habits.1,2 Approximately 20% of colorectal cancer patients are not eligible for curative surgery.3 Abdominal pain, nausea, vomiting, constipation, abdominal distension, and the inability to pass gas in patients with colorectal cancer can be signs of malignant colorectal obstruction, which can become a surgical emergency.4 Previously, surgical treatment in these cases was the only way to decompress the bowel. Since the first case of palliative stent insertion in patients and cases of stent insertion as a bridge to surgery were reported, endoscopic stenting with self-expanding metal stents (SEMS) has been widely used.5,6 Most studies on the effectiveness and safety of SEMS show that SEMS provide a safe single-stage surgical procedure that avoids colostomy in patients that received SEMS preoperatively. It also improves clinical outcomes and quality of life for patients undergoing palliative treatment.7,8 According to recent studies, the technical and clinical success rates of SEMS insertion are reported to be above 90%.9,10 Therefore, the placement of SEMS for initial management of obstructive colorectal cancer is universally accepted.

In this study, we analyzed the outcomes of 158 SEMS insertion procedures performed by a single endoscopist (Cheon JH) in patients with malignant colorectal obstruction who were treated at Severance Hospital, Yonsei University College of Medicine, Seoul, Korea between March 2006 and December 2009. Our study was performed by a retrospective review of prospectively collected data on patient sex, age, cancer location, type of obstruction, purpose of SEMS insertion, type of stent, stent length, and number of stents. Exclusion criteria were as follows: 1) extrinsic obstruction by other cancerous lesions (n=30); 2) a previous history of stent insertion at other hospitals (n=2); 3) benign stricture after a colon cancer operation (n=5); and 4) recurrence after a colon cancer operation (n=1). After excluding 38 patients, we compared the technical success rates, clinical success rates, complication rates, number of stents needed per procedure and procedure duration by quartiles.

This study was approved by the Institutional Review Board of Severance Hospital.

The location of the cancer was categorized into two groups: right colon and left colon. The ascending colon and the transverse colon were included as the right colon and the other areas were classified as the left colon. Technical failure was defined as failure to deploy a stent across the entire length of a colon stricture. Clinical failure was defined as the absence of the resolution of obstructive symptoms (abdominal distension, vomiting, and abdominal pain) and the absence of gas and stool passage despite achieving technical success.11 Problems such as immediate migration, bleeding, and perforation were considered stent-induced complications.12 Subtotal obstruction was defined as a state with narrow stool caliber or the ability to pass only small amounts of liquid stool or gas. Total obstruction was defined as decreased or absent bowel sounds or the inability to pass any stool or gas.7 Procedure time was calculated only after the colonoscope was advanced to the site of obstruction, then the time required to insert a guidewire and stent and to confirm correct positioning and expansion using fluoroscopy was included.

Before placing colonic stents, all patients underwent a computed tomography (CT) scan and bowel preparation by glycerin and warm saline enema. We evaluated the CT scans to assess the extent of the tumor and the location, degree, and length of the obstruction. Stents were placed by one experienced colonoscopist (Cheon JH) from our hospital as previously described.1 Before initiating SEMS insertion, the endoscopist had performed more than 1,000 colonoscopy procedures per year for several years but had no experience with endoscopic retrograde cholangiopancreatography.

A flexible colonoscope (CF-H260AI; Olympus, Tokyo, Japan) was advanced to the site of the obstruction. A biliary guidewire (Jagwire; Boston Scientific, Natick, MA, USA) was inserted into the lumen of a catheter (ERCP-Catheter; MTW Endoskopie, Wesel, Germany), and the guidewire and the catheter were then advanced together beyond the obstruction. The distal and proximal ends of the stricture were confirmed under fluoroscopic guidance by injecting a water-soluble contrast agent (Gastrograffin; Bayer Schering Pharm., Seoul, Korea) through the catheter after removal of the guidewire. The compressed SEMS delivery system was then introduced through the working channel of the endoscope over the guidewire and passed beyond the stricture. Stent release and expansion progressed from the proximal to the distal portion under fluoroscopic and endoscopic control. Abdominal X-rays were obtained on the same day of the procedure, as well as the next day, to confirm correct positioning and expansion.

Data were analyzed to identify the baseline patient characteristics, sites of obstructing lesions, reasons for stenting, outcomes, procedure times, and complications. The data were expressed as the mean±SD, median (range), or no. (%) as appropriate. We compared categorical variables with the chi-square test and one-way ANOVA. Correlations between success rates, procedure times, and level of experience were assessed using Tukey's multiple comparison test and Dunn procedure. A p<0.05 on a two-tailed test was considered statistically significant. Statistical analysis was performed using IBM SPSS version 18.0 (IBM, New York, NY, USA).

The baseline characteristics of the 120 patients are summarized in Table 1. The mean age of the patients (76 men and 44 women) was 64.6 years. The pathological diagnosis of all patients was adenocarcinoma. There were 103 (85.8%) patients with left-sided colonic obstruction, complete obstruction was present in 100 patients (83.3%) and partial obstruction was noted in 20 (16.7%). In terms of SEMS insertions, 45% (n=54) were performed for palliation and 55% (n=66) were performed as a bridge to surgery. The type of stent was classified into covered (n=69, 57.5%) and uncovered stents (n=51, 42.5%). The median length of SEMS was 6 cm (range, 6 to 12 cm). Most patients (95%) underwent SEMS insertion when first diagnosed with colorectal cancer, whereas six patients underwent SEMS insertion during the follow-up period. The median period from the diagnosis of colorectal cancer to stent insertion in these six patients was 13.6 months (range, 3.1 to 33.0 months).

The outcomes of stent insertion are shown in Table 2. Most patients (n=115, 95.8%) underwent the SEMS procedure with a single stent. Only five patients required two stents because of inadequate measurement of the length of the stricture (n=2) or technical failure (n=3). The overall technical success rate was 95.0% (114/120), and the clinical success rate was 90.0% (108/120). The median procedure duration was 16.2 minutes (range, 3.4 to 96.5 minutes). Re-intervention for SEMS insertion was required in 25 patients (20.8%). The median interval between the initial stenting and the second attempt was 89 days (range, 1 to 947 days).

Procedure-related complications were observed in 28 patients (23.3%): obstruction in 11, hemorrhage in 4, stent migration in 11, and both hemorrhage and stent migration in 2 patients. There was no perforation, erosion/ulcer, or mortality. Among the patients with hemorrhage, there was no major bleeding necessitating blood transfusion. Stent migration occurred in 13 patients, and one of these patients underwent emergent surgery, another was treated with re-positioning of a stent that had already been inserted, and the remaining patients had a new stent inserted. The median number of days between the insertion and migration was 47 days (range, 1 to 567 days). Stent obstruction was noted in 11 patients. One of them was transferred to another hospital, another underwent emergent surgery, and three of the remaining patients underwent new stent insertion due to tumor ingrowth. The others recovered after removal of impacted stool. The median duration of obstruction was 3 days (range, 1 to 947 days). Bleeding was noted in six patients a median of 2.7 days (range, 1 to 4 days) after the procedure.

Interestingly, the first 30 cases of SEMS insertion required an average of 1.13 stents per procedure. However, in the third and fourth quartiles, all patients needed only one SEMS insertion. Moreover, the insertion time decreased significantly, 20.9 to 14.8 minutes, after 30 procedures (p=0.005). This indicates that endoscopists who are not familiar with the SEMS insertion procedure can perform the procedure effectively and safely after performing 30 SEMS insertions.

In this study, we collected the data in a prospective manner, and the learning curve was calculated using the results of SEMS insertion performed by one endoscopist. Bowel obstruction can also be caused by extrinsic compression or intraluminal invasion from other abdominal malignancies, such as stomach or ovarian cancer.18 Other studies of the SEMS procedure involve both extrinsic and intrinsic causes of colon obstruction. However, this study only investigated malignant colorectal obstruction caused by colorectal cancer. In this study, we enrolled a larger number of patients compared to another study.20 We also analyzed complication rates and procedure durations by quartiles in addition to technical and clinical success rates. Based on our results, the duration of the SEMS insertion procedure was dramatically reduced after the endoscopist had performed 30 procedures. Similar to our results, Williams et al.20 reported the learning curve of colorectal stenting in 40 malignant colorectal obstruction patients, which revealed that at least 20 cases are required for an operator to be considered experienced based on the success rate and number of stents per procedure.

Our study had several limitations. The data were collected prospectively but were analyzed retrospectively. The long-term follow-up of stent patency was not included in this study, so the comparison of stent patency of SEMS by quartiles needs further investigation. In conclusion, our study demonstrated that an experienced endoscopist can perform the SEMS insertion procedure effectively and safely after performing 30 SEMS insertions.

Characteristics of the Patients and Lesions 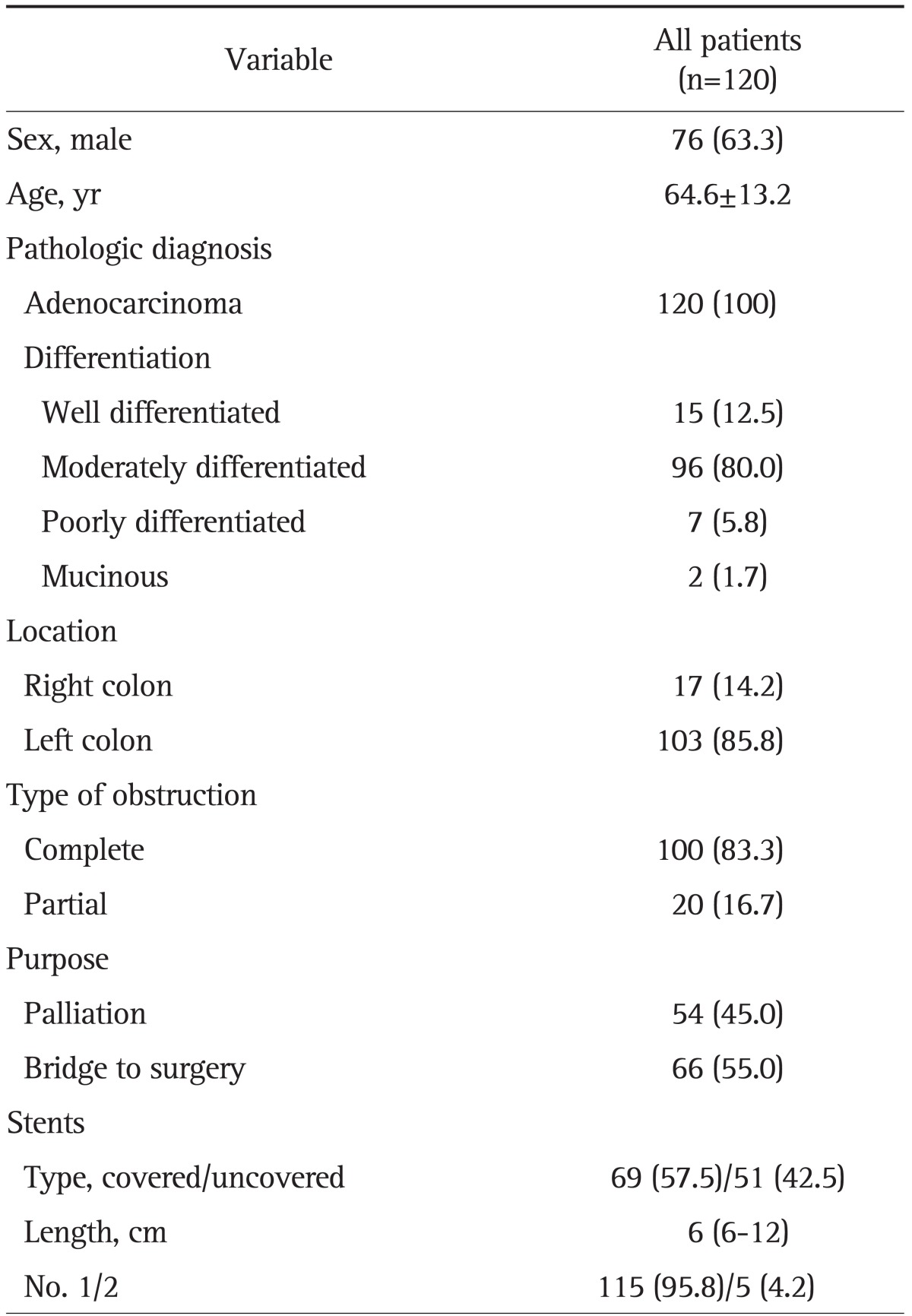 Characteristics of the Patients and Lesions